Last weekend my dad, Jeff, my son Grant and I headed south for a little turkey hunting weekend.  We had a blast!  Dad booked a guided turkey hunt with Jody Smith Guide Service and Jody's right hand man, and pro turkey guide, Dave Powell took us around and showed us some fabulous hunting.

This was a special weekend for me because my 9 year old son would get his first chance at hunting something larger than squirrels and tweety birds.  I was set to let him use my tag under the mentored youth hunting program here in Oregon.  A couple of weeks before the hunt we got out and started practicing with a youth model 20 gauge and after overcoming the realization that the recoil was not going to hurt him he started shooting good enough that I was confident, given the right set of circumstances he could get a bird.  And so that became my goal.

You know how it is when you set your mind to something and you're not really satisfied until you accomplish that task.  That is the wrong attitude to have while hunting but that is the exact attitude I had last weekend.  I was so focused on the goal that I forgot to enjoy the process.  We had some incredible things happen.  It was fun.  It was intense.  I wish I could go back and do it again with a different attitude.  With less stress.  I would enjoy it more.

Grant never got a bird. He missed one tom at 40 yards.  Actually the pellets hit him in the tail feathers and sent him on quite a turkey trot.  Then he just missed a tom at 25 yards.  Shot a little behind the neck and head.  He had another chance or two but the birds caught his movement as he was getting set up to shoot and spooked.
Here is what I learned.  My first goal should have been to introduce Grant to hunting and make sure he had a great time.  Really, that was the goal until I saw how well he could shoot and then things changed.  I wanted more!  Not that it is bad to want your kid to be successful, but in making that the overiding goal I missed out on all the other great things that were happening.

Grant stepped up on this hunt.  He was belly crawling across grass fields.  He was crossing creeks and climbing steep hills.  He was fighting his way through blackberry bushes....and he was loving every minute of it.  He hunted from sun up to sun down (16 hrs) with wet feet and never complained.  He asked a lot of questions, and we talked about many different things. We saw deer, elk, turkeys, and bears...sunrises, sunsets and awesome country over the weekend. I know he felt special being out there and being accepted by his dad, uncle, and grandpa.  I will forever be grateful for the way they accepted him and made him feel on this trip.  Dave Powell was awesome.  He was encouraging to Grant and very helpful.  And he got us on some birds that I'm sure Grant wouldn't miss again.

My son is a tough little dude.  I really enjoyed spending time with him out away from the manufactured world.  I loved talking with him and laughing with him.  I loved seeing him step up the toughness.  He surprised me.  I learned something about Grant this weekend and I think he's gonna be a great man someday.  And a force to be reckoned with in the woods!

And next time, I am going to enjoy the process first and remember that hunting is about way more than the kill. 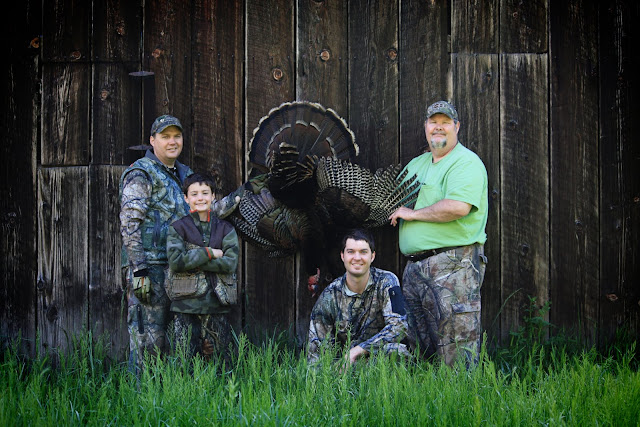 Thanks to my Dad, Grandpa, and my Uncle Jeff.I had LOTS of fun on my first hunting trip.
Grant