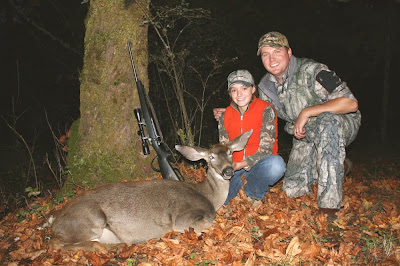 I started hunting deer when I was about 6 years old with my dad. He would let me carry around my toy gun and follow him through the woods while hunting. When I got a little older he let me carry a .22 rifle and a little later on I got to tote around a break action, single shot 16 gauge shotgun. Finally, when I was eleven years old I got to carry a lever action .30-.30, and in my pocket hold my very first deer tag.
I can't remember all of the emotions of my first experience truly hunting big game, but I can remember some of them. I remember the feeling of power being able to carry a loaded lethal weapon through the woods with the intent to shoot, kill and bag meat for the table. I remember the excitement every time I would hear a noise or see movement in the forest. I remember sitting over clear cuts on a stump and waiting, hoping and praying that something would step out. I remember getting the shakes, jellied knees and heart pounding through the chest rush when one finally did appear out of seemingly nowhere. And I remember the dissapointment after emptying my gun at several deer that first year before I finally got one. But I set out to get a deer and on Halloween night of my first deer season I finally punched my tag.

I was hooked. I've been hunting deer every year since, and I've had some amazing times in the woods. I missed big ones. I've gotten a few big ones. I've been with friends and relatives when they have gotten some nice deer, or maybe their first deer. I've been really blessed to enjoy this "sport" for most of my life. And then there is the streak I've had going. Every year since I was eleven years old I've gotten my deer. The streak is still alive and I'm kind of proud of it.

But things are changing for me. This year I had my most successful hunt, and my most memorable hunt ever. This year I took my daughter, Morgan, on her first hunting trip. She has never really been hunting with me before though she has been to deer camp a couple of times and stayed back and played in camp when she was younger. So she was green, and I had lots to teach her. And it was fun to be able to pass my hunting knowledge on to her. It was fun to watch her walk through the woods with a rifle and an orange vest and probably feel some of the same emotions I felt on my first hunt. It was a down right amazing feeling when she squeezed the trigger and dropped a deer dead in it's tracks on her very first shot. It was fun to celebrate with her. I was amazed at how she hung in there and helped field dress and skin it.

I was more proud that evening than any evening of insuring my streak was still alive. And the message I got felt so true...."It is more blessed to give than to recieve." Passing on the heritage, the knowledge, the excitement and the fun of the outdoors is way more rewarding than drinking it in for your own enjoyment. I'm glad my dad learned that, and I'm glad I'm learning that as well.

Thank you for the wonderful memory this fall. I had a blast hunting with you.

-Dad
We were able to capture Morgan's hunt on video and it will be on our DVD coming out this winter. 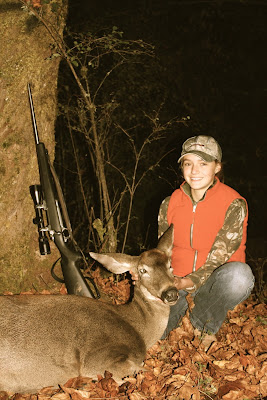 Why do you hunt?

Have you ever stumbled through an awkward conversation with an "outsider" about why you hunt? Have you ever been unable to put words to the unexplainable feeling, emotion, desire and longing you feel?

As many of you know, we frequent www.ifish.net for many reasons...to learn, share, encourage, make friends, promote Faith in the Field, etc...and occasionally there are topics brought up that should be shared with the world! The link below is one such thread we'd love for you all to take the time to read...and share...with other outdoorsmen, and especially those who don't understand why we do what we do or why we love what we love...even those closest to you...spouses, children, parents and friends.

We would never encourage skipping church, or replacing time spent with God's people, but there are those who resonate with God at a much purer level, in a more genuine way, while in the wilderness...and there are ways in which God is experienced outdoors that can't happen indoors. It's biblical. "Wilderness" is defined biblically as "a place or state of withdrawal from the world to face the reality of God." As we've mentioned before, outdoor recreation isn't required to find God, but certainly all those who do venture into raw creation will find God there. Many men would not know God and have a relationship with Christ were it not for time spent in the field.

Click the link below, and as you sift through the jokes, humor and horrible spelling, you'll read some very telling views that reveal the untamed heart God's given each of us...after all, Adam was created in the wilderness.

Why do you hunt? Click here for Ifish.net discussion...

Some lines that stick out to me:

"To get out of the fake world, and back in the real world once in a while."

"Being out in the woods helps to keep me centered and gets my kids away from all the crap in the world that is trying to drag them down the wrong path. It's not about filling the tag, it's about the spark and fire I see in my boy's eyes."

"To Enjoy the World the way it was intended to be enjoyed. Concrete Free."

"I hunt to feed my family."

"Because being in the woods, on a river, or on the ocean makes me feel closer to God than being in a church ever has, or will."

"Its that primal instinct. Stalking and killing an animal involves all your senses. It brings us closer to who we are than anything else."

"To get out into the wilderness."

"To confirm that I am a participant and not just an observer."

"It is the one time of year to get to spend alot more time with my dad and brother."

"In this crazy modern world, its the only thing that feels natural and right."

"No matter how wore out I get, it is still the most relaxing feeling. I don't know exactly why I hunt, but I do have to."

"...and mostly, because golf seems really stupid to me."

The Greatest Teacher (video below)

We men have goals. They’re usually big, as we are dreamers. Lately, mine have included some changes in my walk. I have had some goals not come to fruition as I would have liked.

Enjoy the following recap of my latest adventure with God...as well as video of my biggest buck to date.

We're now on Facebook! Please "like" us and help us grow by spreading the word and suggesting our page to all your friends!
We want to unite those who love the outdoors and Christ...who enjoy time spent in creation, and with our Creator. There's no better classroom than the outdoors, where "God's invisible qualities, eternal power and divine nature are clearly seen" (Romans 1:20)
Find us on Facebook here! Read more...
Posted by Faith in the Field at 11:22 AM , 0 comments

This week we want to share a piece written by Andrew Johnson, one of our Faith in the Field team members, who had a dream season with his stick and string. Click the link below to enjoy some incredible photos and story of what Andrew refers to as the "unexplainable backcountry."